No major election rating site considered Iowa’s Second Congressional District, represented by five-term Democratic incumbent Dave Loebsack, a battleground in 2016. In contrast, Iowa’s First, the district directly north of IA-02 held by freshman Republican Rod Blum, was expected to be a close race. All election ratings sites viewed IA-01 as a Toss Up race, except Sabato’s Crystal Ball which pushed the seat to Leans Republican in its final 2016 election article. Despite the contrasting expectations, both incumbents won reelection by near identical margins. Blum won by 7.6%, or 29,500 votes out of 384,977 cast. Loebsack won by 7.5%, or 27,638 votes out of 370,032 cast.

Both House incumbents found themselves at the mercy of the presidential candidates. Rod Blum sat in a seat President Obama carried in 2012, won the seat by only 2.5% in 2014, and was up against Monica Vernon, the 2014 Democratic nominee for Lt. Governor. Trump’s 3.5% margin in IA-01 buoyed the freshman, and helped Blum expand his margin of victory. Loebsack also represented a 2012 Obama seat, but his 2016 Republican opponent was Christopher Peters, a surgeon who only raised one-eighth of Loebsack’s $1.6 million. Trump carried IA-02 by 4.1%, or 49.1% to Clinton’s 45%. The presidential topline polarized voters, and IA-02 became a marginal contest.

Loebsack announced his decision to retire on April 12, 2019. He left a seat where 85% of the residents are White, 66% live in urban or suburban areas, and 28.5% hold a college degree. We at DDHQ and the Cook Political Report consider IA-02 a Toss Up, though Sabato considers the seat to Lean Democratic.

Presidential margins and demographics figures are only part of the picture. Republicans nominated Mariannette Miller-Meeks in the June 2nd primary, an ophthalmologist and State Senator who previously ran against Loebsack in 2008, 2010, and 2014. Her electoral dance with Loebsack through differing political environments demonstrates how the previous decade reoriented IA-02.

Miller-Meeks attempted to unseat Loebsack twice in the previous version of IA-02. Obama won this version of the district by 3% more in 2008 than the version Loebsack represents today (59.9%/38.4% vs 57.1%/41.6%), because the district contained not just the college town of Iowa City but also the neighboring city of Cedar Rapids. Despite these hurdles, Miller-Meeks capitalized on the Republican-favoring 2010 environment to lose by just 5.1% of the vote, even though Obama and Loebsack won IA-02 by 20 points two years earlier.

Republican Governor Terry Branstad made Miller-Meeks director of the Iowa Department of Public Health following his win in 2010. Miller-Meeks held this position until 2014 when she opted to challenge Loebsack for a third time. IA-02 had moved towards Republicans in redistricting, but Loebsack now had four more years of incumbency. 2014 favored Republicans nationwide, including in the aforementioned IA-01, but Miller-Meeks once again lost by 5.1%, or 52.5% to 47.4%. Loebsack won by combining better-than-average results in the rural farming counties with consistent Democratic strength in Iowa City and the industrial cities along the Mississippi River.

Republican donors and organizers sidelined IA-02 in 2016, but they were not going to make the same mistake twice. Trump showed that there was a Republican path to victory in IA-02, and this time Christopher Peters got the campaign funds and profile he needed. As the 2018 environment turned against Republicans, IA-02 moved off the battlefield and Iowa’s three other seats moved into play. Loebsack won reelection but, compared to past victories, he lost ground in rural areas and received wider margins in urban cities and towns.

Iowa had five contested statewide races on the ballot in 2018. Democrats won two (Treasurer and Auditor), Republicans won three (Governor/Lt. Governor, Secretary of State, Secretary of Agriculture). There was a sixth statewide race for the office of Attorney General, but the long-serving Democratic incumbent Tom Miller only faced Libertarian opposition. Averaging the five contested elections together within the borders of IA-02 results in a Democratic lead of just under 6%. Loebsack outran the average statewide Democrat by 3.1%, and he did it through crossover voters in rural counties that backed statewide Republicans. Loebsack matched and sometimes underperformed the average statewide Democrat in urban cities – areas with fewer Republicans to pull into his column, and in the counties closest to Des Moines in the west. 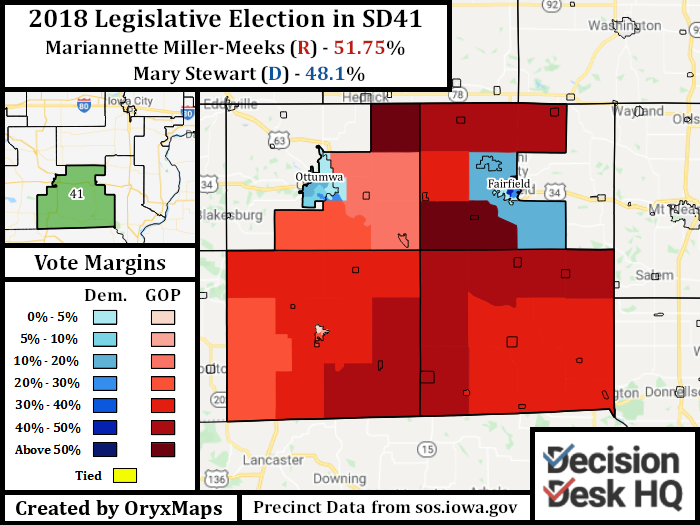 Facing Miller-Meeks is Rita Hart, the Democratic nominee. Hart was a public-school teacher before she went into politics in 2012, with a run for Iowa Senate District 49. Hart won the election, flipping the seat from Republican to Democrat. She underperformed President Obama in SD49 by 3.4%, but still earned enough votes in Clinton and other urban areas to flip the seat. She held her district in 2014, this time winning a four-year term of office to represent Clinton and Scott Counties. Her win helped the Democrats maintain a slight 26-24 majority in the Iowa Senate until 2016. Hart left her seat in 2018 to join Democratic gubernatorial candidate Frank Hubbell as the nominee for Lt. Governor. Their gubernatorial ticket lost the general election to Kim Reynolds and Adam Gregg, 50.3% to 47.5%. Their ticket did carry the counties within IA-02 by 50.7% to 47.3%, or a margin of 3.4%.

Both Miller-Meeks and Hart have impressive resumes and use their backgrounds to connect with voters. Miller-Meeks emphasizes her time in healthcare at a time when public health is voters’ top issue. Miller-Meeks recently attacked Hart in an advertisement for her 2018 vote against funding to combat potential viruses, contrasting that with her time leading the Iowa Department of Public Health. Hart emphasizes her teaching career to connect with voters on school health, reopening, and safety. The day after Hart won the primary, she released a list of endorsements from local Republicans in Clinton and Scott counties who had worked with Hart when she represented them in the state Senate.

Both parties recognize IA-02’s frontline status: Rita Hart is on the DCCC’s red-to-blue program, and Miller-Meeks is on the NRCC’s list of Young Guns. Hart currently leads on the monetary front, raising $1.85 million, twice Miller-Meeks’ total fundraising, and leads in current cash on hand with $1.38 million to $500K for Miller-Meeks. Yet, Miller-Meeks leads in the few district polls released. A Republican internal poll from the Congressional Leadership Fund found the race tied, and Monmouth’s August Iowa poll found Miller-Meeks leading by 3%. The same poll found leads for the incumbent Democrats in IA-01 and IA-03, and a Toss Up race for President. Evidence points towards a Toss Up battle that looks less like Loebsack’s victories and more like the races for the Presidency in 2016 and for statewide offices in 2018.

Benjamin Lefkowitz (@OryxMaps) is a contributor to Decision Desk HQ