Arizona is a frontline battleground state at every level of government. Prognosticators agree that Biden and Trump are in a close race for Arizona’s eleven electoral votes, albeit one with a consistent Biden lead in polling. We perceive Arizona’s Senate race as less competitive than the presidential topline, but this is because Democratic nominee Mark Kelly pushed the seat beyond the Toss Up category. Kelly has large polling, fundraising, and ad time advantages, and has additionally benefited from appointed Senator Martha McSally’s numerous gaffes.  Kelly’s strong lead at the top of the ticket is helping down ballot Democrats, who seek to flip both chambers of the Arizona legislature.

Even though Democrats lead the Generic Congressional ballot and are already on track to hold all the traditional battleground districts in Arizona, one GOP seat is still seeing considerable attention this cycle. Arizona’s 6th was a safe Republican district at the start of the decade, but now both the DDHQ/0ptrimus forecast model and Cook Political consider it a Toss Up race. A congressional ethics investigation found Republican incumbent Dave Schweikert guilty of breaking campaign finance laws in 2018, leading to his censor by the House at the end of July. He faces not just his scandal but the also high-profile Democrat Hiral Tipirneni in a suburban seat that shows movement towards the Democrats. 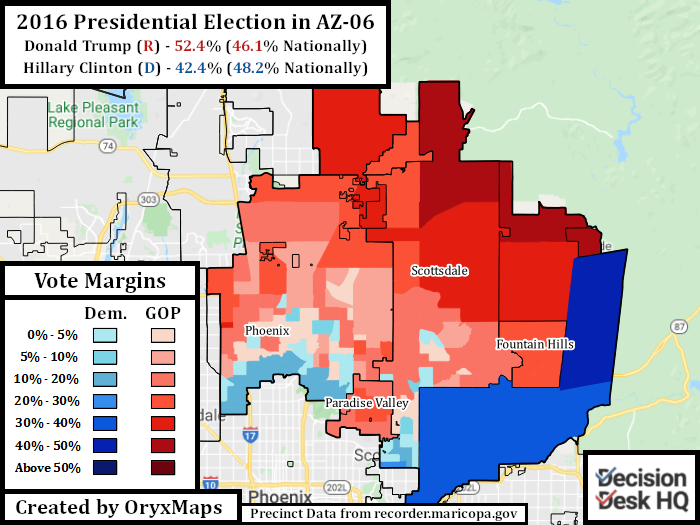 Donald Trump carried AZ-06 in 2016, albeit by a considerably smaller margin than Mitt Romney did in 2012. From 2012 to 2016, AZ-06 moved more towards the Democrats than did AZ-05 or AZ-08, the neighboring Republican suburban Phoenix districts. Hillary Clinton’s 2016 Democratic coalition depended upon those with college degrees, and 43.5% of AZ-06’s residents have a college education. The two Democrats that won statewide in 2018, Kyrsten Sinema and Katie Hobbs in the U.S. Senate and Secretary of State races respectively, failed to carry AZ-06. Sinema put up the better margin of the two, yet she still lost by 3.4%. Democrats gained ground in the parts of the district nearest to the urban center, gains that ended up flipping State Legislative seats yet AZ-06 escaped unscathed and remained Republican.

2016 and 2018 are best understood by an examination of AZ-06 and its surroundings. 64% of residents live in Phoenix, 27% live in Scottsdale, and the remaining 9% live in smaller suburbs or the Salt River and Fort McDowell Native American Reservations. 77% of the district’s residents are White, tied for second whitest district in Arizona, and 17% are Hispanic. Most Hispanic residents live in Phoenix, and the community is strongest in the southwest corner bordering Glendale. This district is the second wealthiest district in Arizona by median household income – $76,615. Democrats gained in the suburban parts of Phoenix and Scottsdale, but the exurban parts of these communities combined with a few wealthy enclaves have so far kept the district in Republican hands.

The issue facing Schweikert is that partisan loyalties are historically fluid when the incumbent is embroiled in a scandal. Two Republican congressional districts, California’s 50th and New York’s 27th, saw tight races in 2018 because there was evidence that incumbents Duncan Hunter and Chris Collins, committed financial crimes. Both incumbents won reelection by slim margins, but both districts are statistically more Republican than AZ-06. CA-50 backed Trump by 15 points, and Trump won NY-27 by almost 25 percent. Perhaps the most famous political corruption case in the modern era resulted in 2008 Republican Joseph Cao defeating Democrat William Jefferson in a New Orleans congressional district that Obama won by a 50-point margin. Schweikert’s violation of campaign finance laws is paltry compared to the high-profile corruption and bribery charges that brought down Jefferson, but Schweikert has a thinner margin to fall back on.

Schweikert pled guilty to violating eleven House ethic rules. The U.S. House Committee on Ethics accused Schweikert of delaying their investigation, leading to a formal reprimand from the full House, an action last taken against California Democrat Laura Richardson in 2012. Schweikert agreed to a $50K fine and this reprimand, satisfying the Ethics Committee. Schweikert has not faced a competitive congressional race in eight years. Schweikert ousted Democratic incumbent Harry Mitchell in 2010, and in 2012 he won a bitter primary against fellow Republican incumbent Ben Quayle (the son of former Vice President Dan Quayle), to represent the newly configured AZ-06. He has not faced a close election since then. Schweikert won reelection by over 10 points, 55.2% to Democrat Anita Malik’s 44.8%, when the nationwide environment favored Democrats in 2018. This has led to fears in some circles that Schweikert does not appreciate the damage caused by the Ethics inquiry and the quality of his Democratic opponent.

Democrat Hiral Tipirneni entered congressional politics in 2018. The special election for Arizona’s Eighth congressional district was one of only eight congressional races that evolved into outlets for national Democratic anger and activism between the 2016 elections and the 2018 midterms. Most of these races were in seats far more Republican than the nation, yet all eight Democrats found themselves the beneficiaries of energized donor and volunteer networks. Even though all but one Democrat, Conor Lamb of Pennsylvania, lost the special election to the Republican, these candidates lost by slim margins and established profiles for themselves and their districts among democratic activists. Tipirneni lost AZ-08 by 5% in the special election, despite the district voting for Trump by 21 points, only a slight swing from Romney’s 25-point margin in 2012. Tipirneni lost by 11% later in November, despite 120K more voters showing up in the general election when compared to the special – still a considerable overperformance when compared to other Democrats.

Tipirneni has hopped districts and now is running in AZ-06. This is a line of attack for Schweikert’s campaign, which argues that AZ-06 deserves a representative who lives in the district. Tipirneni prefers to focus on her ER experience serving residents from across the Phoenix metro area, not just her suburban Glendale community.  The focus on healthcare is an issue for Schweikert, since Arizona is presently ranked sixth in Coronavirus cases and 10th in deaths. Arizona’s failure to limit Coronavirus spread reflects poorly on incumbent Republicans; Governor Doug Ducey now has one of the lowest gubernatorial approval ratings in the nation. Tipirneni is the sixth best funded House challenger in the entire country thanks to her profile from 2018. Her $2.46 million total raised is nearly double Schweikert’s $1.32 million, and she has a six-to-one cash on hand lead when compared to the incumbent. The DCCC has reserved an additional $3 million for ads in the Phoenix media market, although not all of this will go to Tipirneni. By contrast, the NRCC and Congressional Leadership Fund, the GOP’s congressional campaign vehicles, have not reserved any ad time for Phoenix. Two polls have been released, one from the DCCC with a Schweikert lead of 3%, and one from Tipirneni’s campaign with her leading by 3%. Both were released around the August 4th primary.

Schweikert is in the race of his career, and he faces a high-profile Democratic challenger at a bad time for elected Republicans in Arizona. Even though AZ-06 has yet to vote for a statewide Democrat, 2020 may be the year. Kelly, and at times Biden, has leads in statewide polls larger than Sinema’s final margin in 2018. Both internal polls of the district found a Biden lead, and the one that polled the Senate race found a Kelly lead of four points. As a backbench House member from a once solidly Republican district, Schweikert appears unready to fight for what is now a Toss Up district.