Doug Jones’ (D) victory over Roy Moore (R) was one of the most remarkable election upsets of the past decade. Alabama – with an R+14 partisan lean – is one of the most staunchly Republican states in the nation. Prior to Doug Jones, a Democrat had not won statewide office in Alabama since 2006, when Jim Folsom Jr. (D) was narrowly elected lieutenant governor by defeating Luther Strange (R). The very same Luther Strange who would lose the 2017 GOP Senate primary to Roy Moore. Roy Moore’s subsequent meltdown – relating to his alleged sexual misconduct with underage women – opened the door to Jones’ stunning victory. 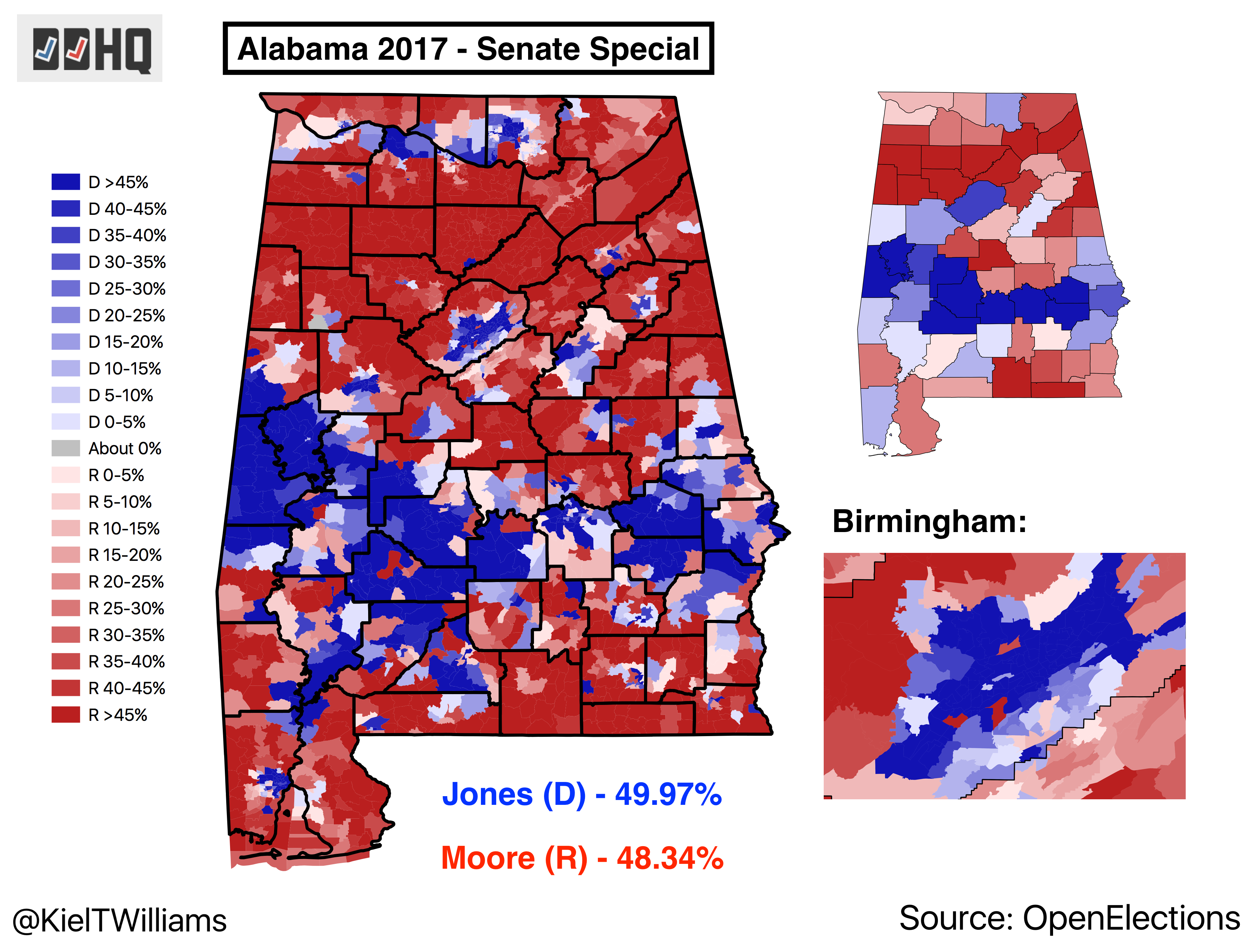 Jones’ 1.5-point win over Moore was driven primarily by the intense support he received from African-Americans. The map of his victory in large part mirrors where African-Americans are most concentrated in the state.  Jones was also helped by a large reduction in voter turn-out, relative to most elections. Voters only cast 1.3 million votes in 2017, compared to 2.1 million in the 2016 Senate election for Richard Shelby. Even in the non-presidential year of 2010, voters cast about 1.5 million ballots in the Senate election. Typically, Democrats need low turn-out to win in a place like Alabama. The state is conservative enough that – if every available voter shows-up – the Republican probably wins. We can understand more about the election by grouping-together precincts by their final victory margin – in percentage points – for either Moore or Jones. While Moore won many rural, heavily white precincts by around 50 points, he failed to carry very many precincts by more than 75 points. At the same time, Jones – while failing to carry as many precincts around the 50-point mark – actually carried far more precincts by more than 80 points. In some of the state’s most heavily African-American regions, essentially no one voted for Moore (the bump at -100, in the far left tail of the graph).

Jones’ victory was consequential: it shifted the Senate balance to 51-49, and essentially ended Republican hopes of repealing the Affordable Care Act. Given the bizarre circumstances of his election, it remains unclear whether Jones would be at all competitive against a more generic Republican in 2020. Republicans heavily dominate the Alabama state government, and there are many statewide elected officials who could run against him. That said, Jones’ approval ratings are decent, and comparable to those of his Republican colleague Richard Shelby. If he can maintain that popularity, and build enough of an independent brand – similar to Joe Manchin in West Virginia – it’s possible to imagine him surviving.