Minnesota’s 1st congressional district – represented by Tim Walz (D) since his defeat of incumbent Gil Gutknecht (R) in 2006 – is one of the key districts to watch during the 2018 midterm elections. This rural southern Minnesota district – encompassing the cities of Rochester and Mankato – voted twice for Barack Obama by 4- and 2-point margins in 2008 and 2012 respectively, before voting for Donald Trump in 2016 by 15 points. An ancestrally Republican district, MN-01 elected primarily Republicans throughout the 20th century, in addition to conservative-Democrat-turned-Jesse-Ventura-supporter Tim Penny, and twice supported George W. Bush by 4 points.

Tim Walz’s departure from the House to run for Minnesota governor makes this open seat one of Republicans’ very few plausible pick-up opportunities in November. Indeed, were Hillary Clinton president, it seems likely this district would revert to GOP control. However, Donald Trump’s presence in the White House, and the momentum it’s generated among Democrats, should combine to make this race extremely competitive. 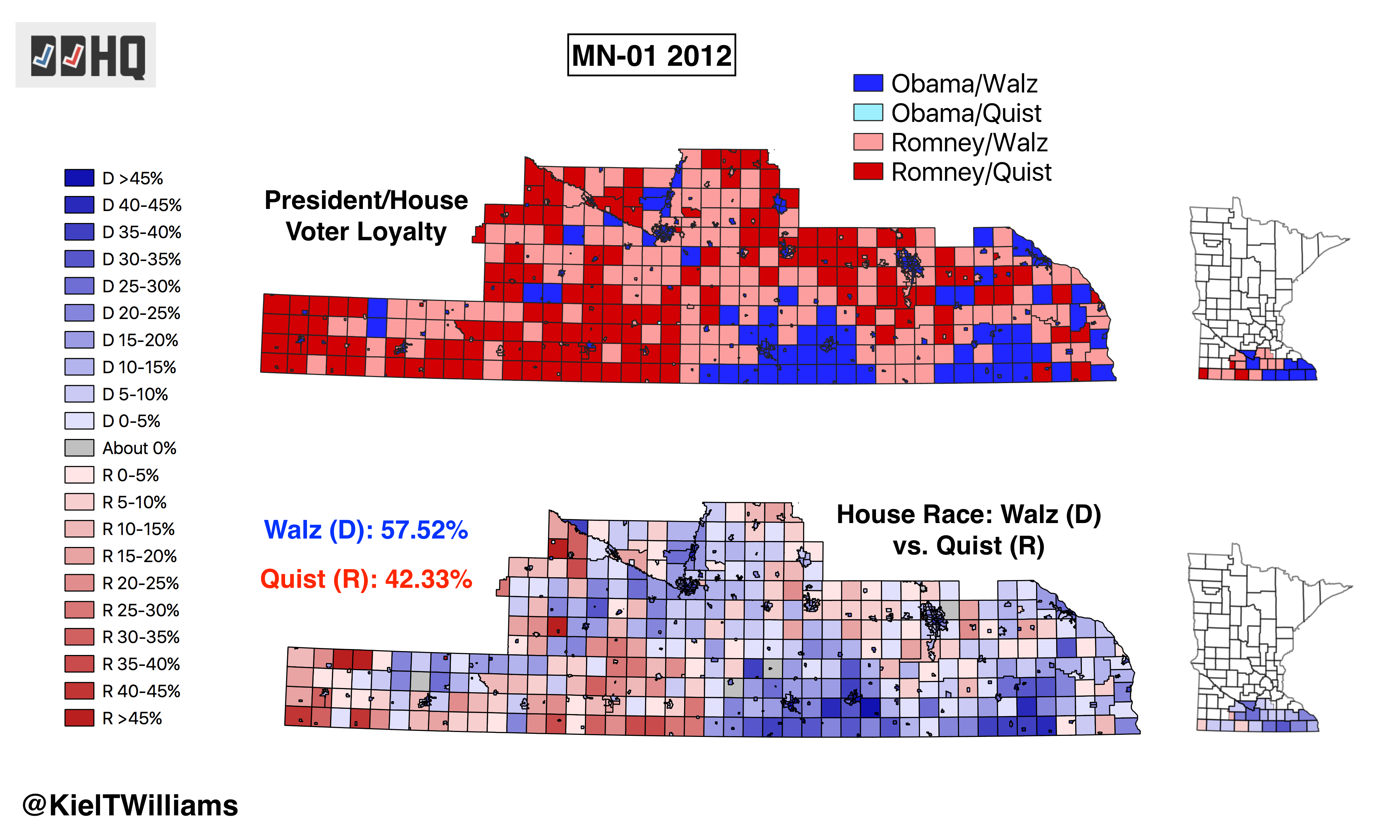 In 2012, Tim Walz was easily reelected to his 4th House term, defeating Minnesota State Representative Allen Quist by over 15 points. At the same time, the 1st district narrowly voted for Barack Obama over Mitt Romney, supporting Obama by a margin of under 2 points. While Obama’s support was largely confined to the areas surrounding Mankato and Rochester, Walz received far more broad-based support, even winning some rural precincts in the more-conservative western portion of the district. 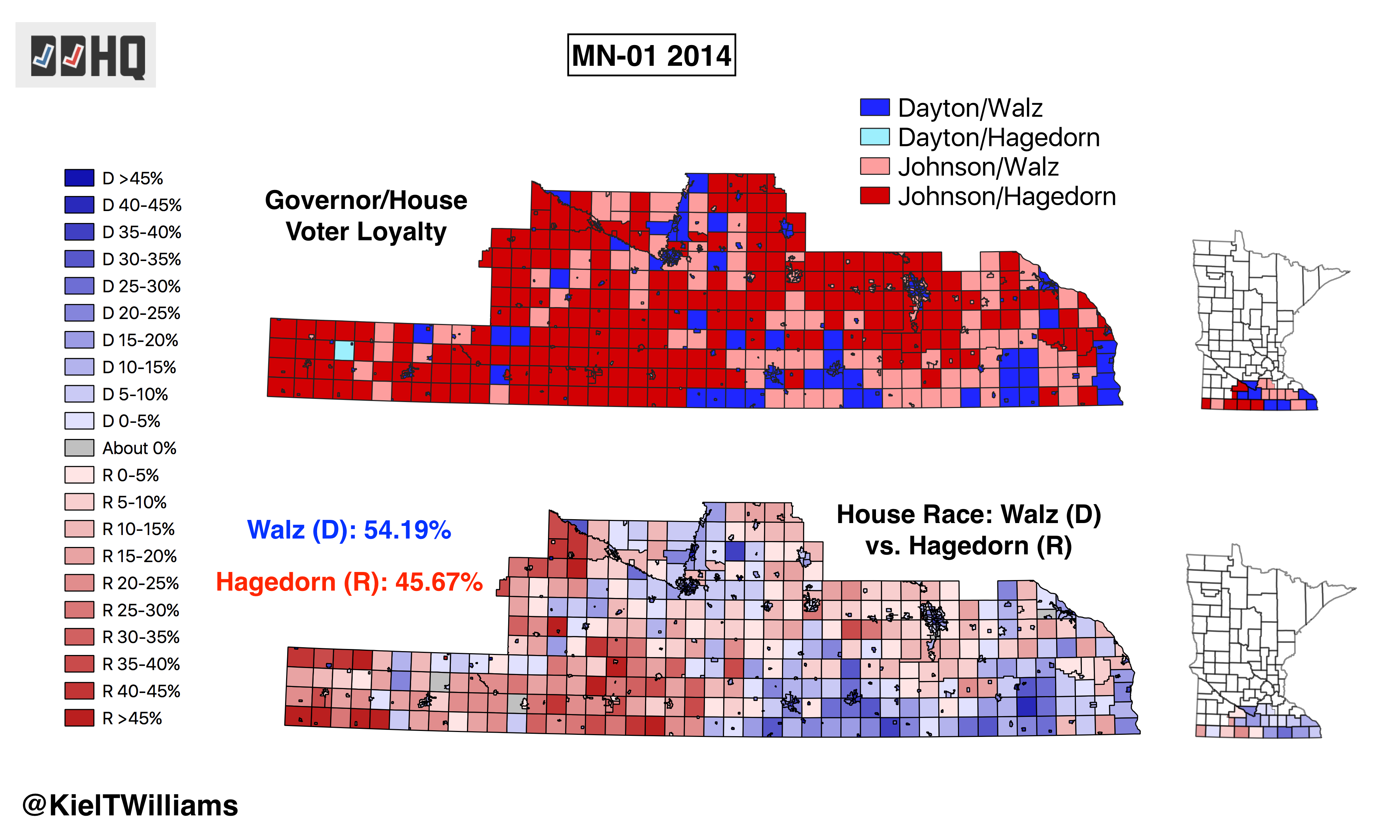 Walz demonstrated his strength as an incumbent in 2014 when – despite a very challenging national environment for Democrats – he defeated businessman and Air Force veteran Jim Hagedorn (R) by over 8 points. At the same time, the district continued trending red, supporting GOP gubernatorial nominee Jeff Johnson by 3 points, even as Johnson lost the state overall by more than 5 points. Despite his victory, there were warning signs for Walz in his 2014 map – his support in the rural western half of the district declined dramatically from 2012. In 2016, Walz barely survived a rematch with Hagedorn – winning by less than a point – as Donald Trump carried the district by nearly 15 points. Most tellingly for Walz, the amount of ticket-splitting declined dramatically from 2012. The rural regions of the district – willing to vote for both Romney and Walz in 2012 – largely abandoned Democrats up-and-down the ticket. Walz survived in 2016 by running-up large margins in-and-around urban areas, like Rochester and Mankato, despite his loss of support elsewhere.

With Walz pursuing the Minnesota governorship in 2018, and Donald Trump occupying the White House, this R+5 seat is expected to be competitive in the November midterms. The Democratic nominee for the seat is likely to be Dan Feehan, a decorated army veteran, teacher, and acting assistant secretary of defense during the Obama Administration. He is likely to face either NRA-backed State Senator Carla Nelson, or Jim Hagedorn, who is mounting a third consecutive campaign for the seat. The Minnesota primary today will decide who faces off, in a race where Republicans currently have about a 40% chance of flipping per the model.