Last night, Georgia had it’s final statewide election of the year. In November, State Rep. Brad Raffensperger (R) finished with 49.1% to ex-Rep. John Barrow’s (D) 48.7% for Secretary of State. The balance went to a Libertarian. As Georgia is the only state that requires general election runoffs, the second round was held yesterday.

Raffensperger, with the lean of the state and lower turnout on his side, defeated Barrow 52 to 48. Geographically, the map broke down as you’d expect. Barrow racked up strong margins in Atlanta, along with several other smaller metros across the state, while the rural areas broke heavily Republican: 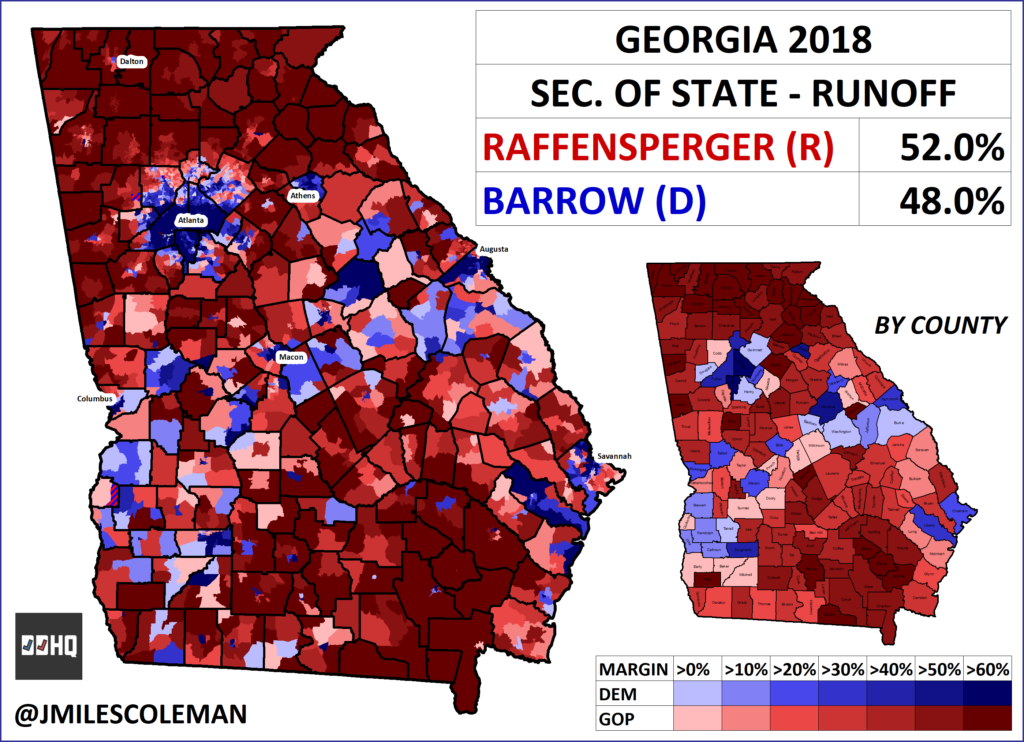 Overall, this was very similar to the Gubernatorial results from last month. Brian Kemp (R), who was the sitting Secretary of State, beat State Sen. Stacey Abrams (D) by 2%. Kemp’s managed to clear 50% – barely – and thus avoid a runoff: Compared to Abrams’ performance last month, Barrow gained in the eastern part of the state. This makes sense, as he used to represent Georgia’s 12th Congressional District, which runs from the Savannah to Augusta areas. Barrow’s eastern strength actually  continued north into Appalachia. However, he ran behind Abrams in much of the Atlanta suburbs – a region where Democrats are becoming increasingly dependent on for votes. As usual, turnout slumped from the November general election to the December runoff. Overall, 62% fewer votes were cast. All but one yellow precinct in Clarke County (Athens) cast more votes in the first round. This is Barrow’s home county. The turnout drop was less severe in the east: