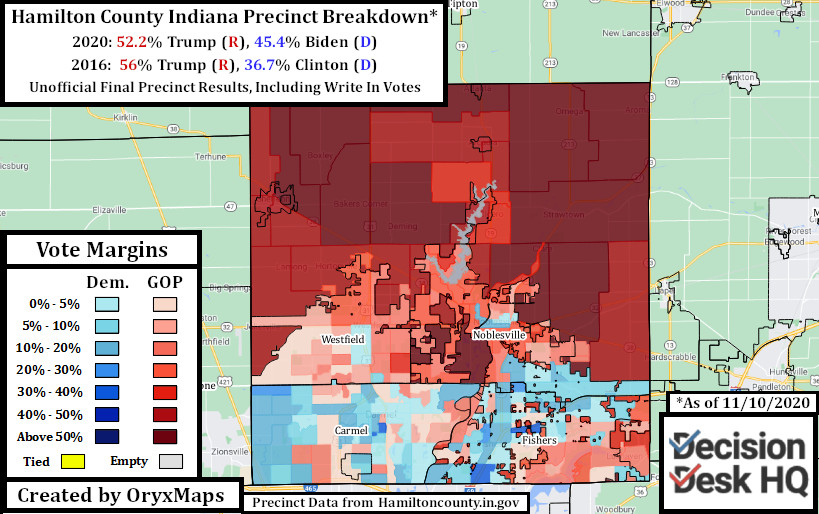 Despite Spartz’s victory, Joe Biden may have had more votes than President Trump in IN-05. Marion County will not release precinct data until November 16th, but the Presidential numbers in Hamilton, Boone, and Madison Counties point towards a tight result. IN-05 resembled several other Democratic targets this year, and none flipped from the Red to Blue. Seats like Illinois’s 13th, Michigan’s 3rd, Missouri’s 2nd, Ohio’s 1st, Pennsylvania’s 10th, and New York’s 2nd were identified as seats where statewide Democrats did well in 2018. Although Hillary Clinton in 2016 did not win in any of these districts, these were seats that had the potential to flip from Trump to Biden. The issue for Democrats is that former Republican voters shunned Trump at the top of the ticket, but kept maintained their previous loyalties downballot. These suburbs stayed with the Republican candidates down the ticket where it mattered. IA-02 is heading to a recount. Iowa law allows for specified recounts in whatever geographic area the candidates choose to request, be that every county in the district or only a single precinct. 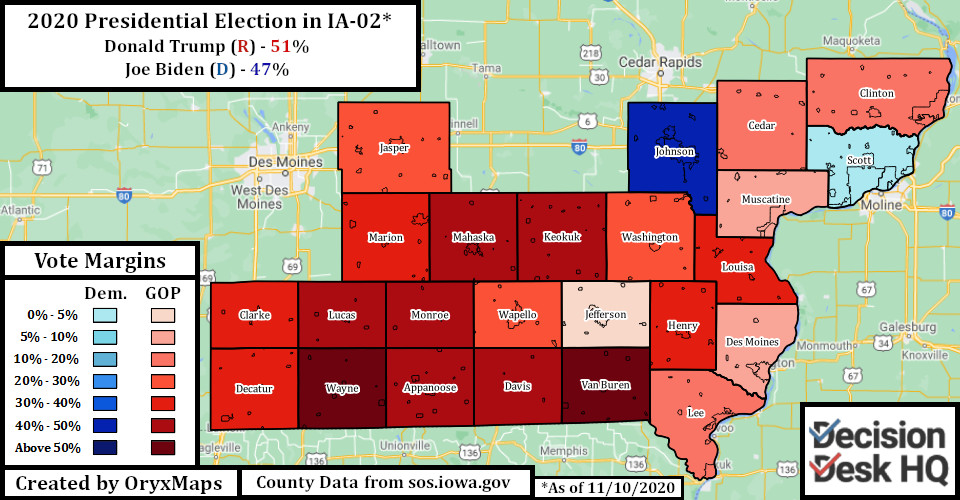 Joe Biden did not win IA-02. He only got 47% of the vote to President Trump’s 51%. This was the issue in many of the districts Democrats flipped or held in 2018 that were more conservative than the nation. Even though Democratic incumbents outperformed Joe Biden, the surge in turnout nationwide meant more Republicans turned out in conservative areas. Hart is overperforming Joe Biden, especially in her old Clinton County base, but it might not be enough. Maricopa County still has a few hundred ballots left to count, these numbers are not final. Tipirneni outperformed Joe Biden’s margin in AZ-06. As of writing this, President Trump has 51.3% of the vote to Joe Biden’s 47.3%. It is unusual because 2020 Democratic challengers in suburban districts usually ran behind the Presidential topline. This suggests that either Schweikart’s scandals or Tipirneni’s brand from 2018 had a lasting impact on Arizona voters. Tipirneni ran ahead of Joe Biden in the western, Phoenix portion of the district. This section borders Glendale where Tipirneni ran in 2018, but it is also the area most favorable to Democrats. Arizona Democrats appear to have flipped a State Senate district and a State House seat in this section of northern Phoenix. CA-25 remains too close to call. As of this, writing Republican Mike Garcia leads Democratic State Representative Christy Smith by 219 votes of over 330,000 cast.

Historically, California’s month-long counting process benefits Democrats, but this year the trendline varies. Younger voters still are over-represented in the outstanding vote in some parts of the state, but likely Republican votes mailed on election day are overrepresented in other Counties. Most of the vote remaining in CA-25 is from the Los Angeles County portion of the district, where Smith is currently winning. The lead could potentially change hands several more time depending on the counting process. Democrats and Republicans failed to flip any Congressional seats in the Lone Star State. This obviously includes TX-23, the district that stretches from San Antonio to El Paso, which was rated a Democratic flip as early as 2019. In a state as large as Texas, there are enough moving parts that the parties cannot lay the blame for campaign losses on any particular group or region. Joe Biden lost ground in the Rio Grande Valley but surged in the suburbs. Biden is losing TX-03, the suburban seat based out of Plano, by 1.2%, or 49.7% for President Trump to Biden’s 48.5% as of November 12th. Republican Congressional candidates in conservative seats benefited from both high levels of split ticket voting, and that Biden failed to flip any Texas congressional district that Robert “Beto” O’Rourke marginally lost in 2018. TX-24 flipped from Trump in 2016 to Biden in 2020, but Republican Beth Van Duyne won by 1.3% over Democrat Candice Valenzuela, or 48.8% to 47.5%. There however were comparatively few split-ticket voters in Democratic-held TX-32 and TX-07. Texas deserves a deeper analysis. Some Texas counties, most notably San Antonio’s Bexar County, have not released precinct reports. I intend to perform a complete examination for Decision Desk as soon as these counties release their data to the public, which at the absolute latest is early December. It appears that the White Whale of Democratic politics, a Blue Texas, eludes even Congressional Democrats thanks to suburban ticket splitting.