OH-11 and the Democrats

Then-President-Elect Biden announced in 2020 he intended to nominate OH-11 Representative Marcia Fudge as Secretary for Housing and Urban Development. Both Biden and Fudge won OH-11 with approximately 80% of the vote, meaning that the Democratic primary effectively decided who would represent the district. Voter support initially congregated around Nina Turner, a former Ohio Legislator better known for her work in Bernie Sanders’ Presidential campaigns and Our Revolution. National CBC politicians including Congressman Jim Clyburn rallied around Shontel Brown in response to Turner’s perceived electoral strength, boosting her profile. Shontel Brown won with 50.2% of the vote, or 37,666 votes, to Nina Turner’s 44.5% and 33,420 votes. Brown won Cuyahoga County (Cleveland) home to approximately 90% of primary voters by 6%. Turner won the much smaller Summit County (Akron) portion of the district by less than one percent. OH-11 is a majority-minority African American district. All community demographics break down along ethnic lines. The African-American population in and around both Cleveland and Akron lag their White neighbors in the oft-cited demographic indicators of educational attainment and household income, among many other statistics. Over a century of local policies birthed this stark contrast, from redlining in the 1930s and 40s to industrial decline in the 1970s and 80s. The election however did not fall clearly along this broad demographic divide. Brown won both African American and White voters districtwide. She did slightly overperform with White voters, but neither major demographic group overwhelmingly favored one candidate and denied victory for the other.

Instead, smaller and localized groupings of voters within the district explain the distribution of electoral coalitions. Turner did better in the urban sections of both cities regardless of race, with Brown doing better in the suburbs. Brown dominated with non-African American suburbanites, most notably in Shaker Heights and other east Cuyahoga communities. Some of these communities have large Jewish populations and most are part of Brown’s Council district.

Shontel Brown faces Republican Laverne Gore in the November Special Election. The overwhelming Democratic composition of the electorate near-guarantees that Brown is the next representative for OH-11.

OH-15 and the Republicans

Incumbent Republican Congressman Steve Stivers announced in April that he would resign from Congress on May 16th and assume leadership over the Ohio Chamber of Commerce. This vacancy opened up a seat former President Trump won with 56% to Joe Biden’s 42%, and therefore attracted numerous prominent Ohio Republicans. 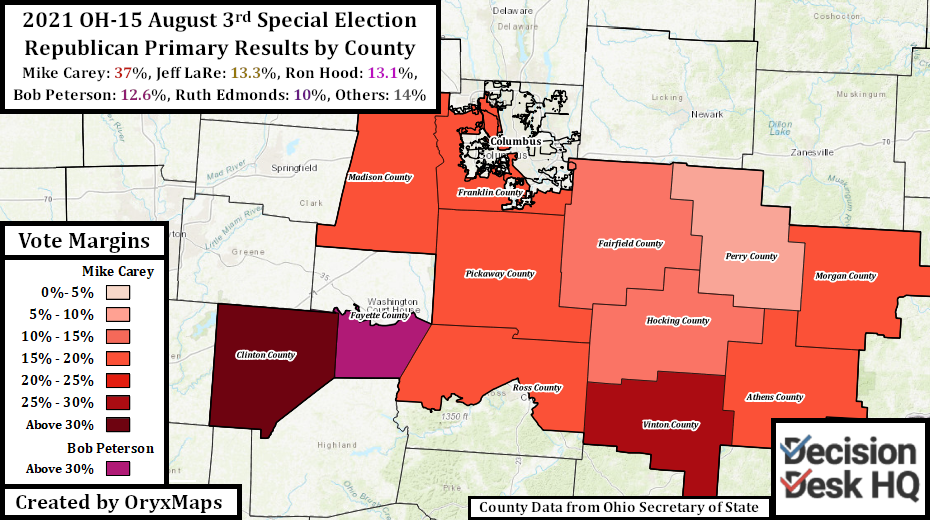 Mike Carey triumphed over the divided Republican field. Carey won 18.6K votes and 37% of the vote – 12K votes more than his nearest opponent. LaRe, Hood, and Peterson each had their own legislative bases of support and divided Carey’s opposition. They won 13.3%, 13.1%, and 12.6% of the vote respectively. Carey won eleven of the twelve counties within the district, and his plurality victory allowed him to win almost every precinct in the district. Removing the dominant Carey from the analyzed results reveals division within his opposition. LaRe came in second in his home county of Fairfield that he represents in the legislature. Hood and Peterson divided the rural vote largely along the lines of their legislative districts, with the exception of Morgan County where Peterson finished one vote ahead of Hood. Edmonds finished second in Franklin, and a minor candidate, Thad Cooperrider, finished behind Carey in Perry County. Nearly all of Kunze’s support came from her district in Franklin County, though she only finished fourth place in the county overall. These strongholds of support meant that Carey could unite a dispersed coalition and win with a plurality.

Mike Carey faces Democratic State Representative Allison Russo to win election to Congress in November. Russo flipped a suburban Franklin County seat outside of Columbus in 2018 and held the district in 2020. Mike Carey starts as the overwhelming favorite to hold this conservative district for Republicans, but Democratic Columbus and Athens could give Russo victory if everything goes perfectly.